This is a wild eagle nest and anything can happen. While we hope that all eaglets hatched in this nest will grow up healthy and successfully fledge each season, things like sibling rivalry, predators, natural disaster as well as territorial disputes can affect this eagle family and may be difficult to watch.

In order to protect the eagles and their nest, the specific location of this nest is private and cannot be disclosed.

If the chat window is frozen and not scrolling, please refresh the page.  You may need to do this often.  For a smoother chat experience, please use the Discord app for PC, phone or tablet.  Instructions are below

Chat Schedule (All times are EST)

Join us on social media!

As our viewers will remember, since 2008 Gretchen Butler has been carefully keeping records of this Bald Eagle nest, located in Northeast Florida. The pattern of life in the Hamlet was predictable, with resident eagles, Romeo & Juliet, returning in early Fall to begin a new season, lay their eggs and raise eaglets to fledge. At the same time, they protected their nest from all intruders, keeping eggs and eaglets safe. They maintained an unprecedented 100% success rate over 10 seasons, raising 19 eaglets.

However, the 2018-2019 season was very different, as several large mature eagles disturbed the peace and tranquility of this nest. The expectations of the season ended in heartache as Juliet returned to the nest with an injury and was subsequently driven from the nest by a rival just days before the eggs were to hatch, leaving Romeo to do the work of two. When an egg hatched on Christmas Day 2018, a female eagle following Romeo to the nest swooped down and took the hatchling. This was not A2.

A2 continued to be seen with visiting male eagle, Samson, and they evolved into a bonded pair. For months, our viewers have called this beautiful eagle Gabby because she is so talkative, and in October 2019 she was officially given the elegant name Gabrielle by the NEFL team.

A New Family Moves In – Samson and Gabrielle 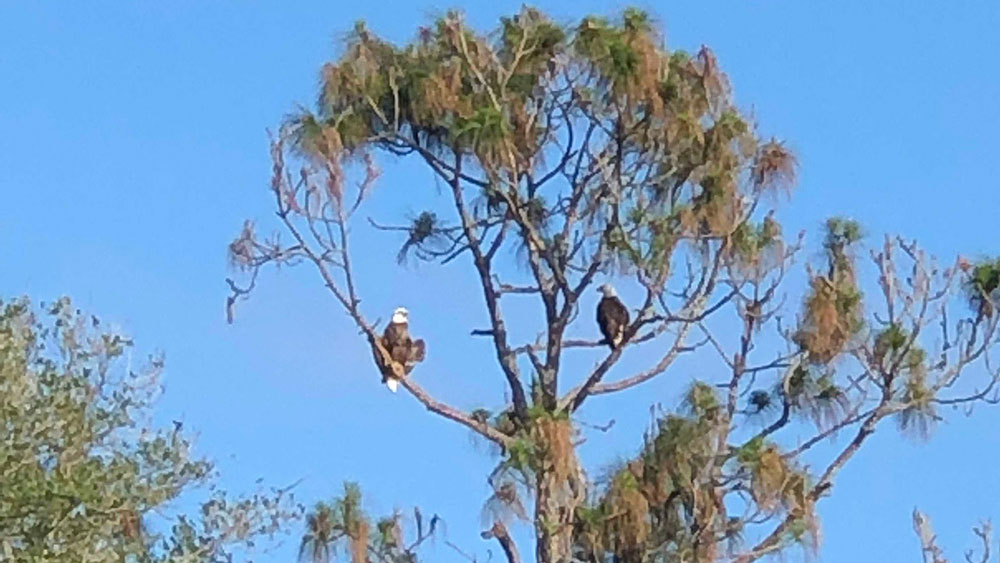 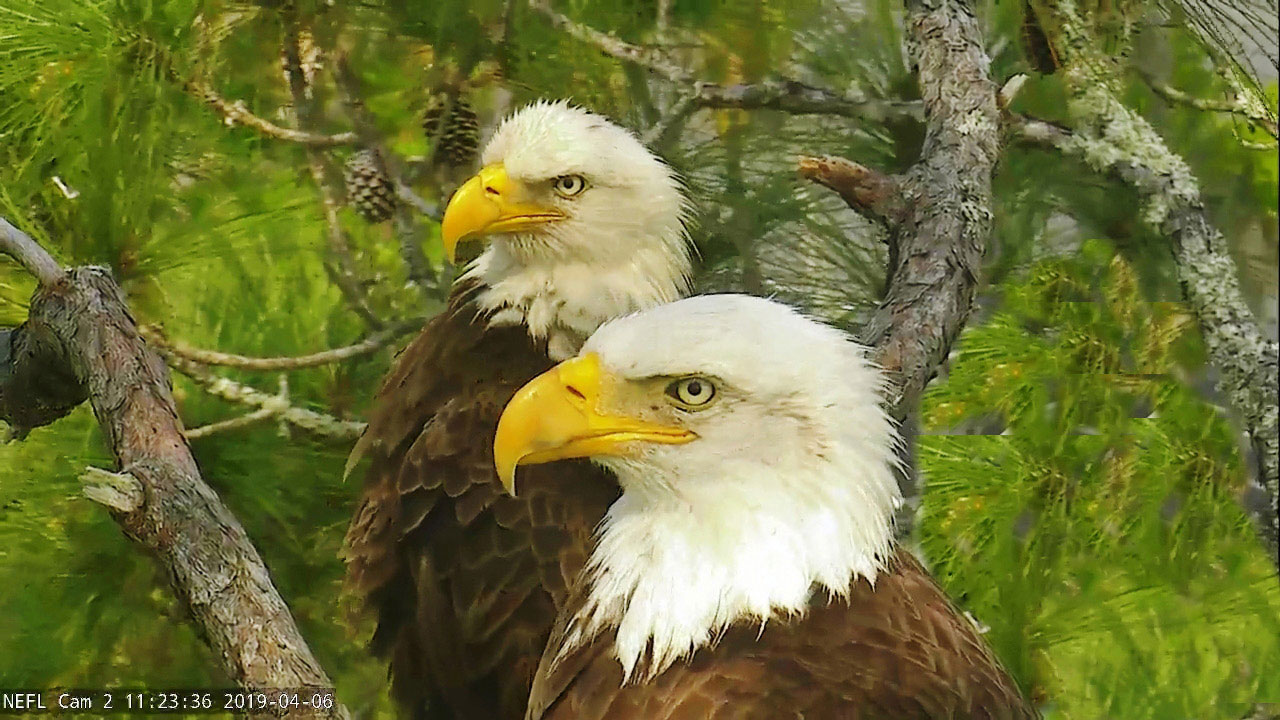 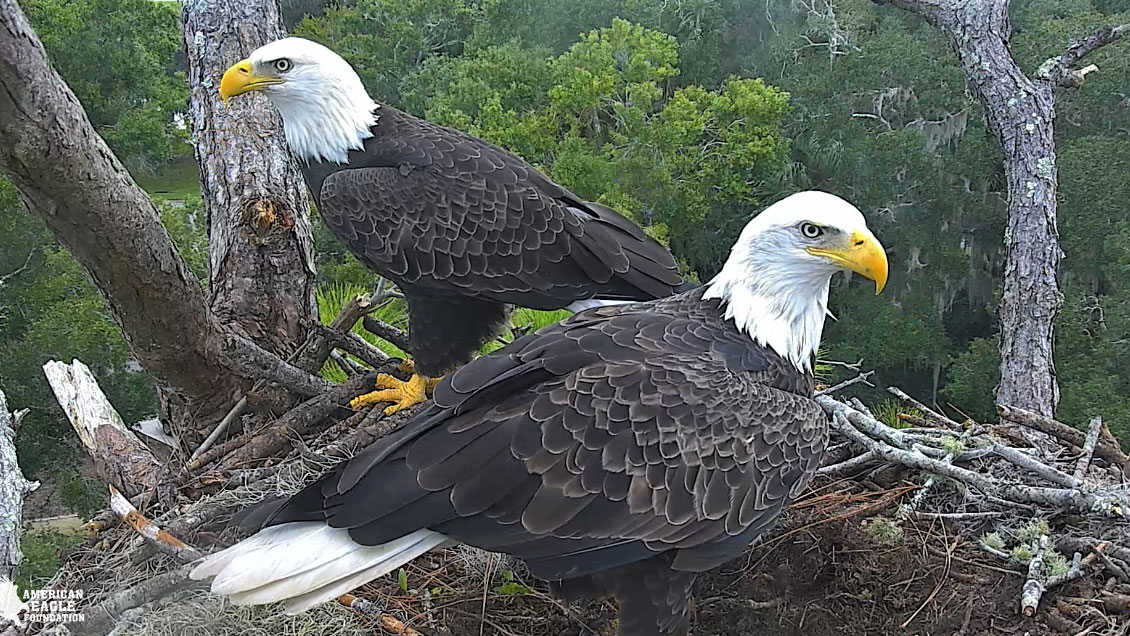 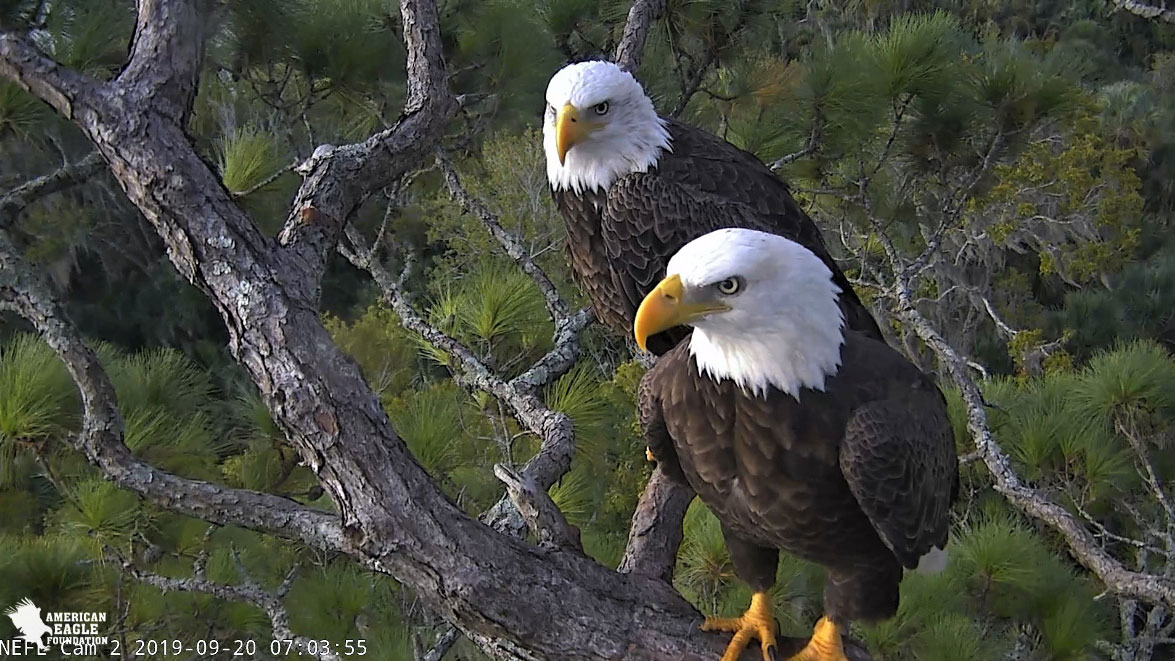 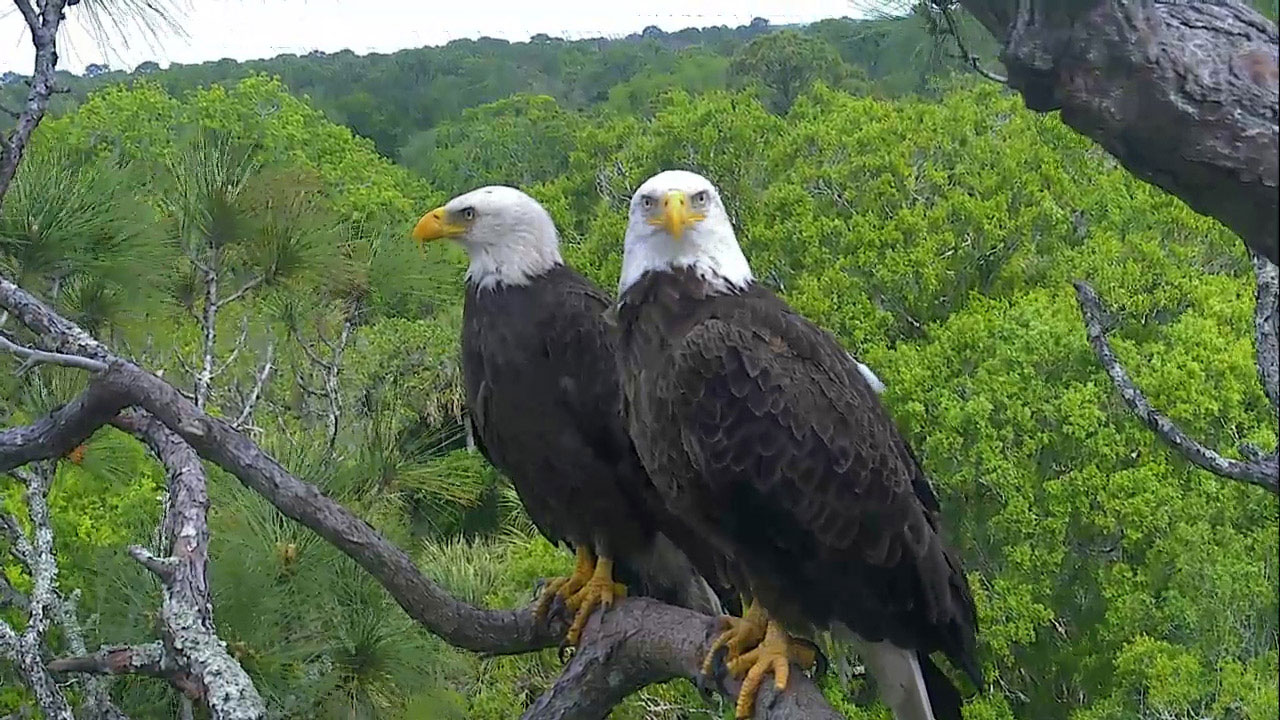 Swipe or use controls to change slides.

Samson hatched in the very nest featured in this site on December 23, 2013. This was a happy nest; food was in abundance, and there was very little sibling rivalry between Samson and older sibling, Delilah, who hatched on December 20. Samson and Delilah both successfully fledged the nest, gained strength and honed their hunting skills. We know that Samson left the area on April 22, 2014, at 120 days old.

It was four years later that Samson was seen back at the nest, with positive identification being made by photographic markers and also by his flattened toe, which had been observed while he was still a nestling.

Samson appeared back at the nest on August 26, 2019 and began bringing in sticks and moss, giving us an indication he was claiming the nest and preparing for the season ahead. His mate, Gabrielle, appeared on September 12. Since then, the pair was seen with each other, and sleeping in the nest tree or nearby. There was definitely a changing of the guard in the Hamlet. It’s been delightful watching Romeo and Juliet’s offspring, Samson, and his mate, Gabrielle, evolve into such a beautiful and compatible pair.

On Monday, January 13, 2020 at 6:34 p.m. EST, Gabrielle laid her first egg, NE22. A pip was first visible on Feb. 17 at 9:41 p.m. and the eaglet completely hatched out February 19 at 1:24 a.m. The second egg, NE23, was laid January 16, 2020 at 10:41 p.m. EST. A pip was observed February 20 at 7:33 a.m. and the eaglet completely hatched out at 4:30 p.m. the following day, February 21, 2020. Welcome eaglets NE22 & NE23! Through a naming contest, they were soon named Jules (NE22) and Romy (NE23) in honor of Romeo & Juliet. On April 20 Jules officially branched and perched higher on April 29. Romy officially branched on April 29. Jules fledged on May 7, and Romy fledged on May 17. Jules has not been spotted since her fledge day, but Romy continued to frequent the nest and surrounding area with Samson providing for him. Gabrielle left the area the day after Jules fledged but returned on June 15 then departing the area in the 25th. It is highly possible she and Jules were together during Gabrielle’s absence. Samson was last seen in the area on July 13. It is possible she and Jules are together and may yet return to the nest or be spotted this season. Both first-time parents did an amazing job in caring for their offspring.

While our hope remains constant that Romeo & Juliet are doing well, we look forward to watching the lives of this new family unfold. This is a new beginning for all of us as Samson continues the legacy of the Hamlet. See a timeline of the activities of Samson and Gabrielle.

On October 1, 2013, the American Eagle Foundation (AEF) started providing live video streaming from a wild eagle nest located near the NE coast of Florida. The nest is located about 80 feet up in a Slash Pine tree and was built by Bald Eagles Romeo & Juliet approximately 12 years ago. Through the years, the nest has grown considerably in size and weight, likely weighing close to a ton. Since 2008, Gretchen Butler, Volunteer for Audubon “EagleWatch” Program and the American Eagle Foundation “Eagle Nest Cam” Program, has closely monitored and documented important events associated with the resident eagles Romeo & Juliet and their offspring.

As the 2019-2020 season unfolds, a new chapter will be written about this nest and its resident eagles, and we will be watching with you, as we all continue to learn more about Samson and Gabrielle.

The Educational Impact of These Cams

The educational impact of our high-definition nest cams has been phenomenal, providing unprecedented insight into the Bald Eagle nesting process.

This season, we have to abandon our familiar expectations, as there are two new eagles laying claim to the nest. We will all watch with great anticipation as Samson and Gabrielle write a new chapter in the history of NEFL.

This project also focuses on conservation, habitat protection, and the dangers that eagles still face in the wild. In the end we will conserve only what we love, we will love only what we understand, and we will understand only what we are taught. – Baba Dioum, International Union for the Conservation of Nature and Natural Resources.

To enhance the educational experience, a moderated chat is embedded on the cam page, allowing viewers to comment and ask questions about the eagles. Knowledgeable and friendly moderators help guide the discussion and provide insight. AEF also encourages students and groups who are studying eagles or related topics to reserve time in the chat where their questions can be answered.

This has been a hugely successful endeavor, and we have welcomed many classrooms with students of all ages. Teachers across the nation have written us with glowing compliments about the positive impact this experience has had on their students.

One 4K cam and three high-definition cams are available on this page. Three are mounted on the nest tree and provide different views of the nest. One cam is mounted on a nearby tree at a lower angle and provides a long range view of the nest tree and the canopy. If you watch for a while, you may be lucky enough to see eagles flying to and from the tree, and when the eaglets get to a certain size, you will see them begin to branch and ultimately fledge the nest.

At night, an infrared light is turned on. The eagles cannot see this light; it is outside their visible spectrum of light. Neither can humans. If you were at the nest site, looking up at the tree at night, you would only see light from the moon or stars. The infrared light is converted into visible light (black and white) by the camera.